With a few free minutes before the last show of the day, it’s tempting to step outside of fashion for a moment and catch up on what’s happening in the rest of the world. And, possibly, that could lead to wondering whether this final presentation will be able to be contextualized within said rest of the world.

Maybe it’ll reflect on societal norms, or the economy. Or, since it’s Narciso Rodriguez, a designer so entrenched in a certain New York City aesthetic, maybe it’ll be analogous to the mayoral primaries, happening at that very moment. Or maybe the colors will match those of the new multi-hued iPhone 5C. Or not. Sometimes there is no overarching, greater meaning—beyond that of great clothes.

Even the designer, when describing the origins of his spring collection, was fairly straightforward. It was a continuation of resort, he said backstage, and playing with textures and artisanal touches to create the perfect pieces. And it was pretty. What more do you want?

Well, for one thing, come next summer if not sooner, you’ll want a slip dress. Because based on what’s been on the runways here, the slip dress is gaining traction as the piece for spring. And you’d be well off in Rodriguez’s: sheer white spaghetti-strapped silks with flecks of sun-gold metallic in barely detectable floral patterns. They came out toward the end, after looks including an only slightly more structured strapless number in mint green with a swath of loden fabric trailing across the body and down the back. That train, juxtaposed against the short, sporty hemline gave off a really appealing and modern idea of elegance and speed (the latter of which was amplified by chic, pointed-toe flats with ankle straps).

What else was pretty? A lot. The short, jacquard shift in light coral and blush florals, and a dusty rose sleeveless and asymmetrical silk top with a shiny short wrap skirt come first to mind. And the black-and-white wool jackets and coats that opened the show recalled the nineties-era minimalism that’s been running not only through this week but also Rodriguez’s career. As a whole, these clothes represented the designer at top form: sharp, tailored, sexy and, at just the right moment, soft. And that’s enough. by Emily Holt, via: vogue

Here are some of the Narciso Rodriguez Spring-Summer 2013/2014 RTW Highlights: 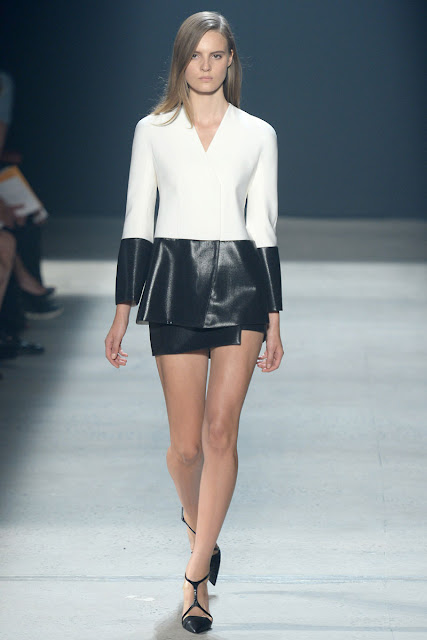 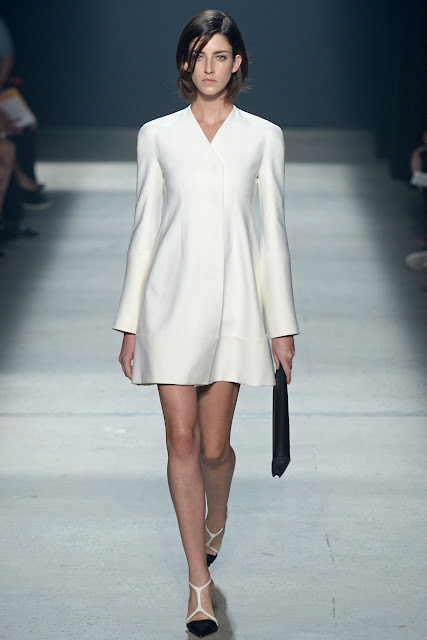 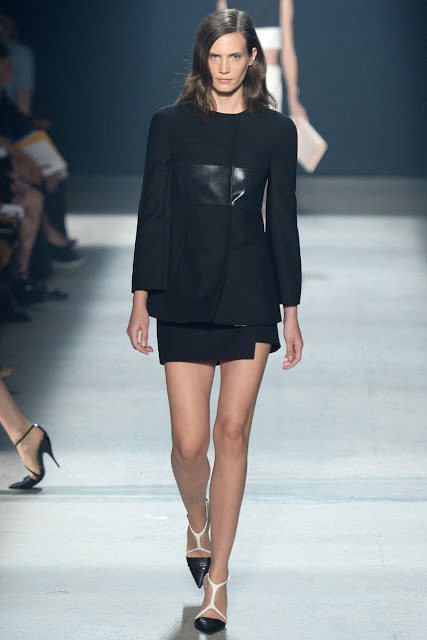 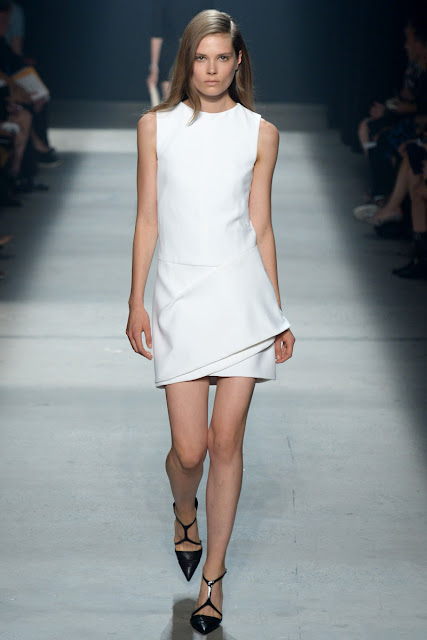 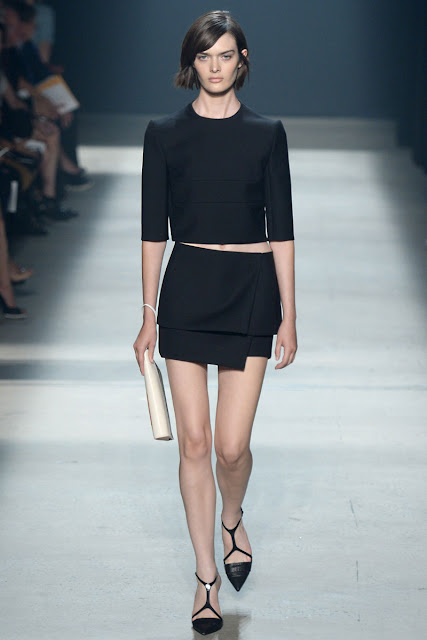 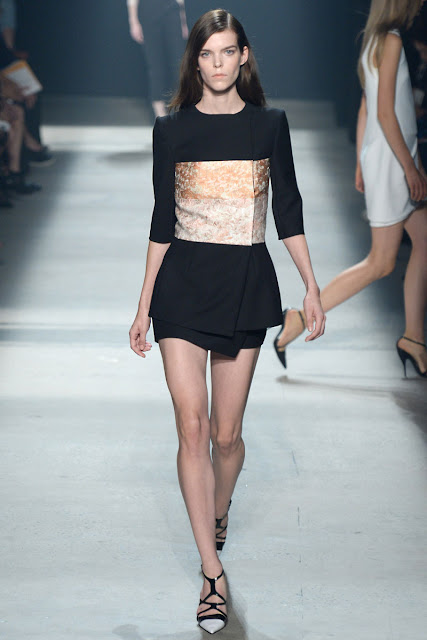 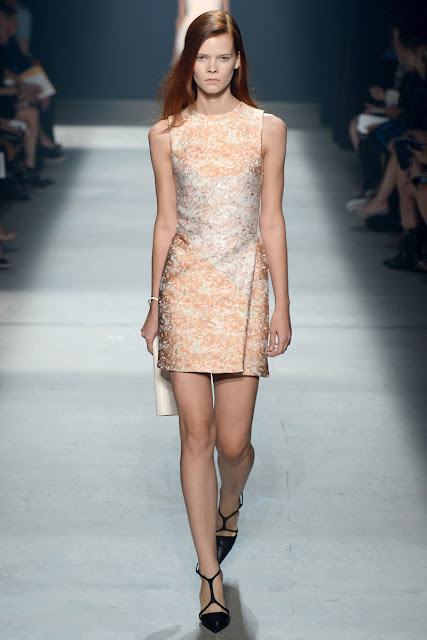 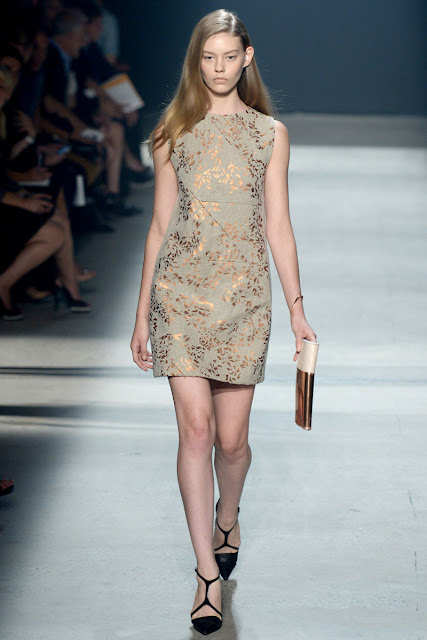 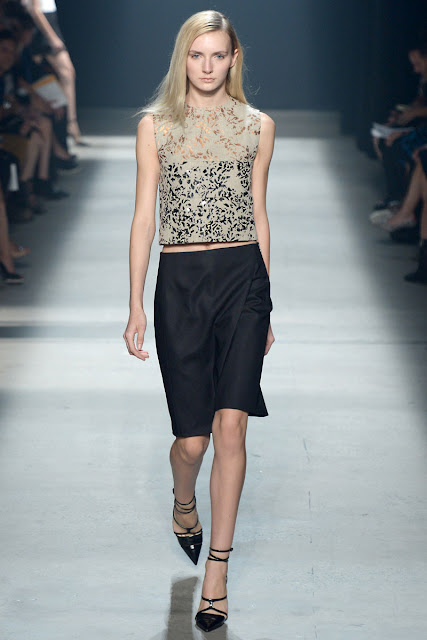 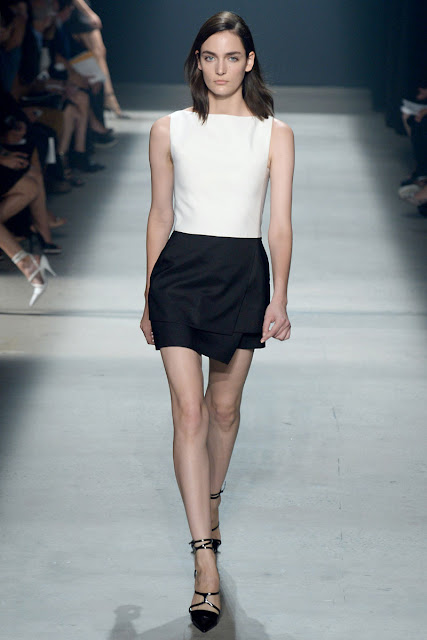 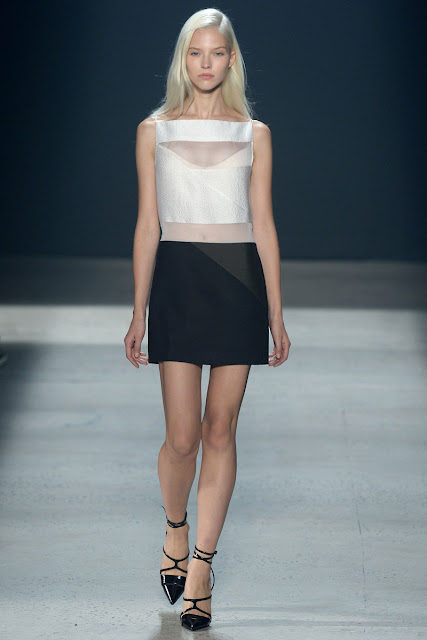 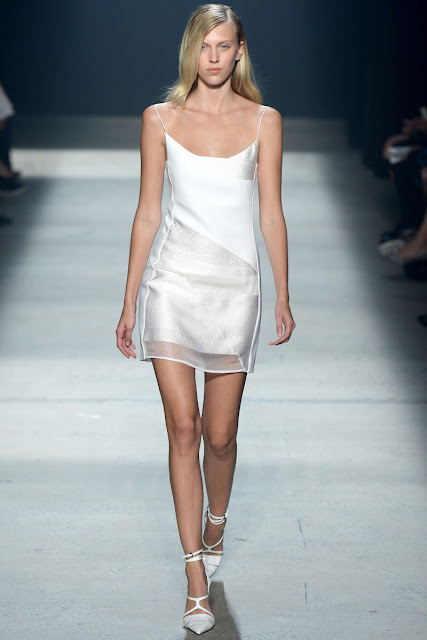 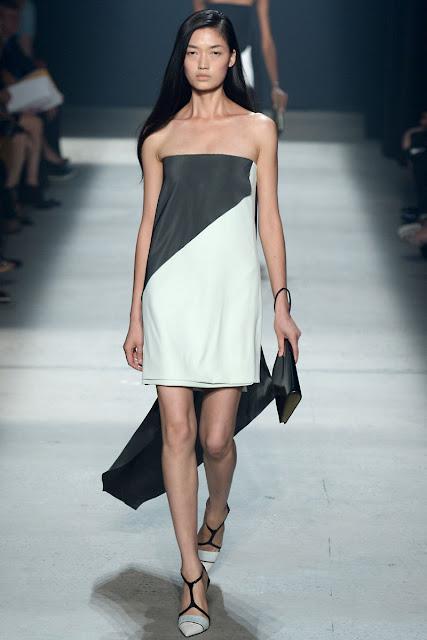 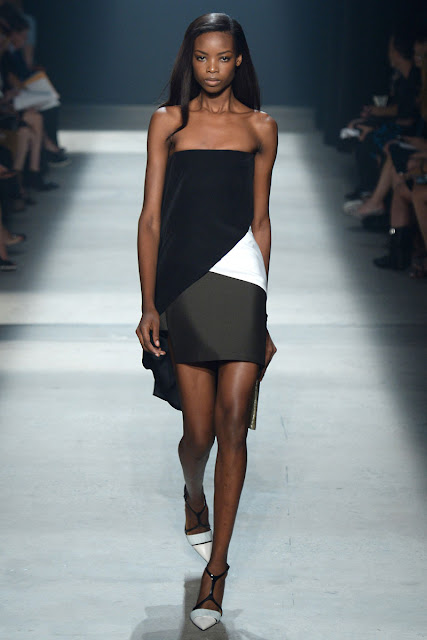 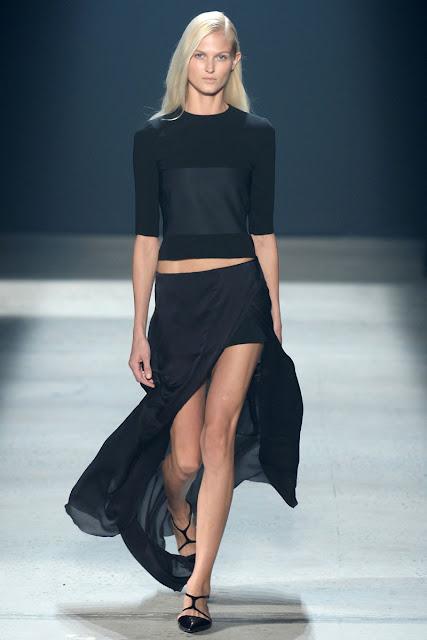 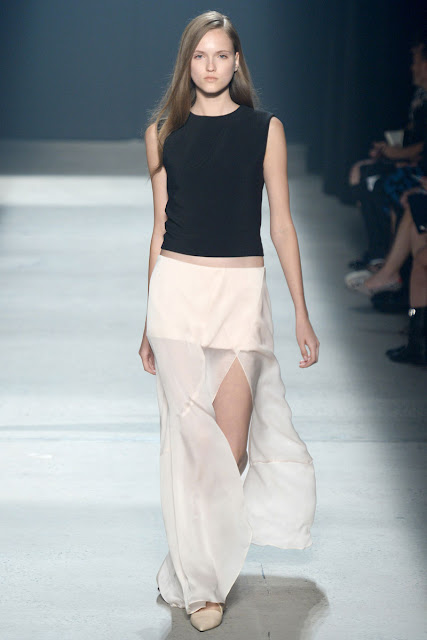 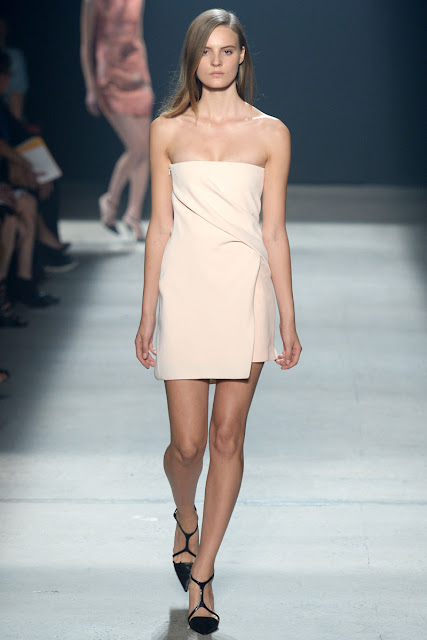 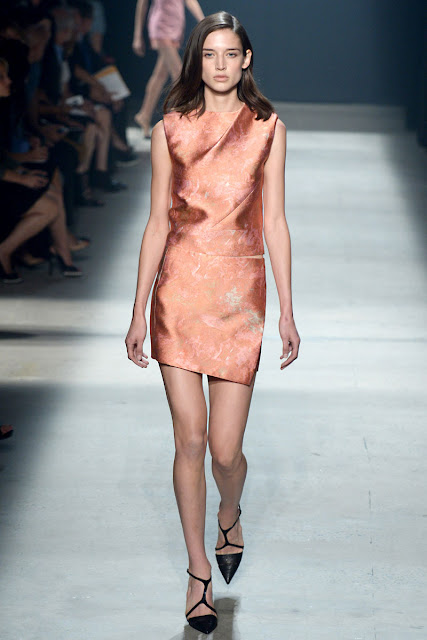 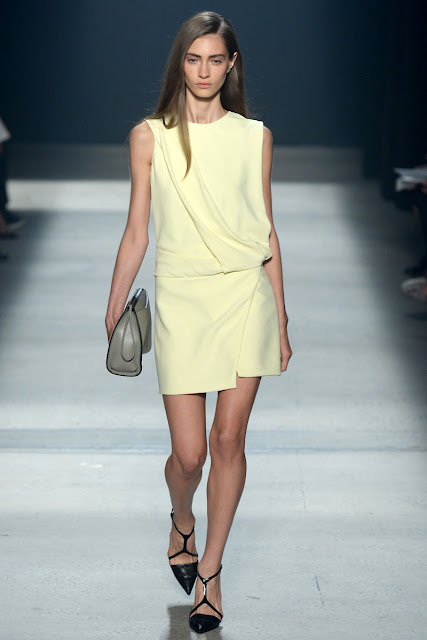 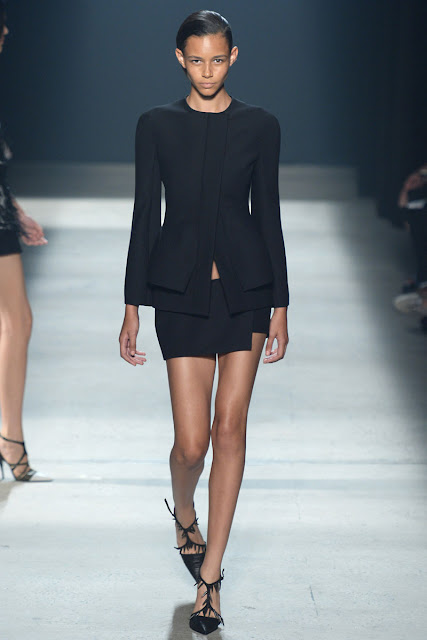 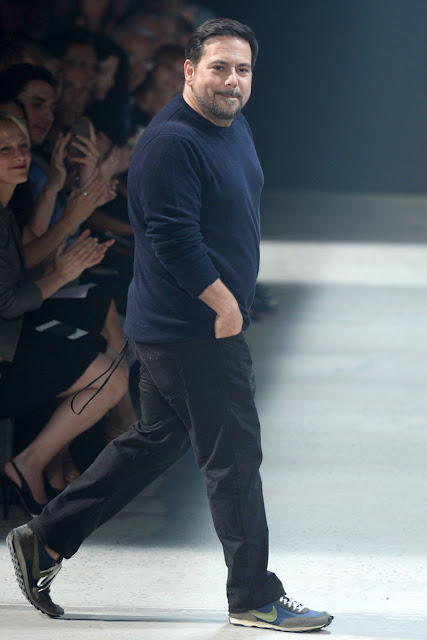